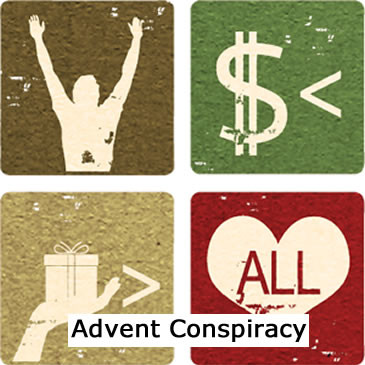 Our advent preaching series this year is called “The Advent Conspiracy” and begins slightly ahead of time. This is really a movement rather than a preaching series. The aim is to help Christians keep Jesus at the centre of Advent and Christmas.
The movement's message is to reject the overwhelming consumerist approach to Christmas in order to celebrate the meaning of Christ’s birth more fully. There are four founding principles: Worship Fully, Spend Less, Give More, Love All.
Pastors Greg Holder, Chris Seay, Rick McKinley and others began the Advent Conspiracy in 2006 when they proposed to spend less on gifts and give more to the poor.
The testimony of many is that they are discovering a new joy and happiness and a deeper faith. It has helped people slow down and experience a Christmas full of creativity, compassion and love.
You can see a promotional video:  [AC] 2012 Promo - Basic from Advent Conspiracy on Vimeo.
And read much more at www.adventconspiracy.org.
We will tailor the material to fit our setting here at St Alfred's so it won’t look like everything you see on the video or the web site. For example they have given a lot of money to one particular charity whereas we will have our own ideas on what to support.
Although we are beginning the series early, the other three weeks will actually come in Advent in December. We wanted to start early to give you advance warning what this is about and to give you time to start thinking.