Daniel: Politics and the Lion’s Den 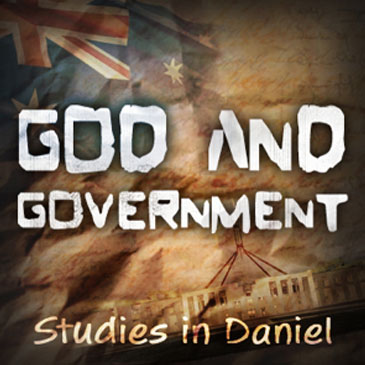 Daniel: God and Government The setting of Daniel is the sixth century B.C. when the Jews are in exile in Babylon. You might wonder what such distant events might have to say to us today. First of all the book of Daniel will help us reflect on God’s rule in our world. It raises issues such as persecution, evil, suffering, power politics and forces us to think about how we are to live as Christians in a hostile world. Sec-ondly Daniel and his friends are models of faithful, wise and courageous men who offer us insights on how we might respond to the temptations and trials that we face. Thirdly, Daniel provides some of the background thinking to what Jesus has to say about the kingdom of God, his identity as “the Son of Man” and the end of the world. So there are many good reasons for reading Daniel. We will do chapters 1-6 in the coming weeks and look at chapters 7-12 over summer.

Daniel 6 | David Williams | Daniel 6 is about Daniel in the lions’ den. It is one of the most famous stories in the Bible and it concludes the stories of Daniel in the Babylonian court. (Chapters 7-12 contain dreams and visions which we will preach on over the summer starting Jan 2). Daniel 6, like the preceding five chapters, illustrates the basic themes that God is in control and that God saves. Despite corrupt politicians, the abuse of law and hungry lions, God protects Daniel and helps him to prosper. Although King Darius could not save him the true king could. The main actor in the chapter is God but it is clear we are to see Daniel as a role model of faith: someone who will not renounce his faith in God even in the midst of persecution (see Heb 11:33). Daniel 6 points us forward typologically to Jesus’ death and resurrection. Both Daniel and Jesus are falsely accused and handed over to be executed. The big difference is that Jesus dies. And it is only after suffering death that he emerges from the tomb (his “lion’s den”) victorious over death. Ever since then Christians have been prepared to risk everything – even death – in following Jesus.